Join Soccer-Coaches.com on YouTube! Over 40,000 subscribers already!
Home
Game Intelligence
How to Successfully Open and Use Passing-Lanes in Soccer

How to Successfully Open and Use Passing-Lanes in Soccer

Soccer today is seen from a defensive point of view, shaped by ball-orientated defending. Therefore, it is important to create strategies against tight defensive formations. This includes good individual technical skills and abilities as well as a developed and aligned tactical behavior of the whole team.

Receiving and Passing as Foundations

The following solution is based on flat passes. This demands high passing-skills of all players. As a basic principle, every pass shall be played as sharp as possible (pace of playing), but as soft as necessary (teammate must be able to control the ball safely).

All passes shall be precisely passed into the ball-away foot or slightly into the forerun, depending on the current situation of the receiver. If the ball receiving player has wide space in front, the pass optimally comes into the forerun in order to achieve the highest pace possible.

Initial Dribbling Instead of Passing from a Standing Position

In order to ensure a save combination play, it is necessary for the players without ball as well as for the ball carrier to regularly create situations in numerical advantage. If the ball possessing player has wide space in front, it is advisable to conquer this free space in a fast dribbling. Thereby, the ball carrier is supposed to dribble as long as possible towards an opponent. Then, he passes in the last possible moment the ball to his teammate without any risk (last-minute-pass). This results in the situation that the opponent is not able to instantly pressure on the ball receiver. Additionally, the passing player is already in movement which leads to a higher passingquality. Furthermore, he is able to use the dynamic in order to re-offer again to play for example an one-two combination.

Releasing Sideways Instead of Coming Towards the Ball

The classical “pulling away and coming towards the ball” is only useful if the space behind the releasing player is usable (or the player on the ball is situated under instant pressure and shortly before losing the ball). This could occur after an one-two with the approaching player or as a chip ball. The better way is to release sideways and slightly drop back. Therewith, a passing-lane into the depth of the pitch is created and the player could be introduced in a half-open position.

According to illustration. The starting player dribbles towards the dummy and player A releases in an arch-sharped run from the second dummy and is passed to.

The focus lays on the correct timing of releasing and offering as well as the technical execution.

While player A starts an initial dribbling, B releases sideways into a half-open position. The pass is played with the left and received with the right one and forwarded with two touches with the left foot. Change of positions after 5 (10,15) combinations. 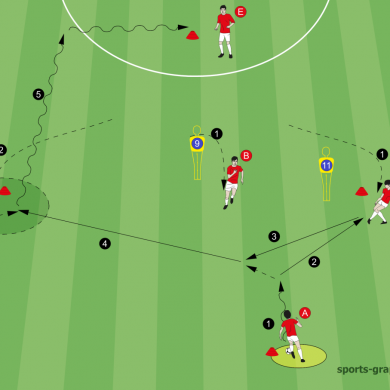