This book is considered a sequel to the book The Soccer Games and Drills Compendium. 350 Smart and Practical Games and Drills to Form Intelligent Players–For Advanced Levels, published in 2016, and its content and quality build on that of its prequel.

In The Soccer Games and Drills Compendium is fundamental training content such as passing, dribbling, shots on goal, feints, juggling, and dueling. Additional key subjects are transitioning and reacting, chaos and action, different ways to start a game, active defense, tournaments, tactical exercises, and athletics.

350 Smart and Practical Games and Drills to Form Intelligent Players–For Advanced Levels, the authors continue their realistic training approach and differentiate the key aspects of basic and classic soccer training.

More Information about this e-Book here

Variation
After ten successful passes in 4-on-2 without the opposing team touching the ball (see team A on the ﬁrst ﬁeld or team C on the second ﬁeld), the team not in possession (see team A or C) must change to the other ﬁeld without a ball to try to capture the ball there.

More Information about this e-Book here 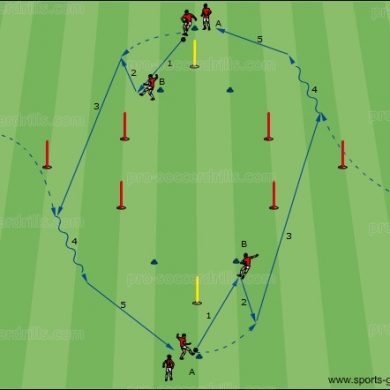