HOW IMPORTANT ARE THE TRANSITION PHASES? 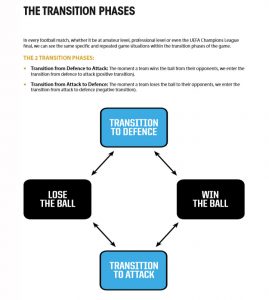 Football is a game of constant turnovers of possession. We always have one team defending, trying to win back possession of the ball. The other team is therefore in the attacking phase, trying to create goal scoring opportunities.
These transitions happen continuously throughout a game and can happen extremely quickly. Whether a team will be successful or not is largely down to whether they are capable of exploiting the unbalanced defence of the opposition when they win the ball and whether they can close down space and limit the options of the opposition when they lose the ball. In the modern game, the faster you are able to react as a team in the transition phases, the more successful you will be!

TRANSITION FROM DEFENCE TO ATTACK

After winning the ball, a team should look to exploit the tactical situation as quickly as possible. It is important to move the ball forward before the opposition are able to close down the ball carrier and mark the potential receivers of the next pass. The transition from defence to attack requires quick reactions, anticipation, technical accuracy, visual awareness of the space to play into, intelligent movement and good decision making. This means that the players need to demonstrate physical speed and speed of thought. The aim is to train your teams in the transition from defence to attack at high intensity so they learn to play at high speeds. The faster they are able to make this transition, the more successful the team will be.

TRANSITION FROM ATTACK TO DEFENCE

Ater losing the ball, it is important to apply immediate pressure to the new ball carrier before he can get his head up to be able to dribble or pass forward. This should be done with the player that lost the ball and at least one more player closing the area around the ball zone. The rest of the players make sure to mark the potential receivers and block the passing lanes.
The players need to react immediately after losing possession and anticipate the positioning/movements of their opponents. This has to be worked on in training sessions to make sure that the defensive movements are coordinated as a team, with good cohesion and communication. As like the positive transition, the negative transition (from attack to defence) needs to be done at a high intensity and speed – making sure that the opposition are unable to exploit the team’s lack of balance and launch a successful fast break attack.

TOP COACHES IN THE TRANSITION PHASES 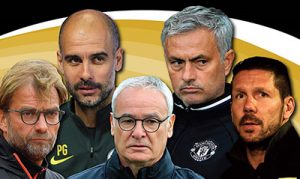 The most important coaches who have had the most influence in recent years, with both their ideas and their implementation of their training philosophy in the transition phase, have been:

Diego Simeone:
“I am always enthusiastic and when I came, I said I wanted to rediscover the essence of the club: An Atlético team that was always aggressive, intense, competitive, counter-attacking and fast… I think that’s what we’ve been giving.”

Pep Guardiola:
“I want my players chasing the ball like (dogs chase) dog bones.”
“‘You cannot be brilliant when you disappear when you don’t have the ball. It’s impossible. Football is a connection between what you have with the ball and without the ball.”

Jürgen Klopp:
“The best moment to win the ball is immediately after your team just lost it. The opponent is still looking for orientation where to pass the ball. He will have taken his eyes off the game to make his tackle or interception and he will have expended energy. Both make him vulnerable.”
“Football is about emotion and speed. It’s a transition game“.
“If you win the ball back high up the pitch and close to the goal, it is only one pass away a really good opportunity most of the time. No playmaker in the world can be as good as a good counter-pressing situation.”

Jose Mourinho:
“What tactical trends do you see at the top level of the game? Transitions have become crucial. When the opponent is organised defensively it is very difficult to score. The moment the opponent loses the ball can be the time to exploit the opportunity of someone being out of position. Similarly when we lose the ball we must react immediately.” “Everybody says that set plays win most games but I think it is more about transitions.”

Claudio Ranieri
“Today, some complain that Leicester lose too many balls. But that’s only natural, when your team plays at the speed of light.“ “I give my strikers freedom to attack and cut across the lines, as long as we immediately return to a 4-4-2 as soon as the ball is lost.”

In this ebook each coach’s ideas and tactics are presented. 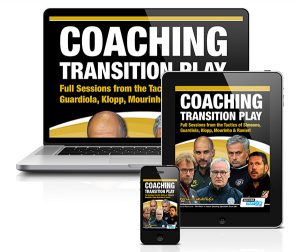 Learn to “Coach Transition Play” – Defence to Attack and from Attack to Defence
with 98 Practices based on 32 Transition Game Situations from the Tactics of:
Diego Simeone, Pep Guardiola, Jurgen Klopp, Jose Mourinho and Claudio Ranieri

This incredible FULLCOLOUR book helps coaches improve their training sessions in the most important phases of the modern game – the transition phases.

This book provides 32 transition game situations based on tactical analysis of Diego Simeone, Pep Guardiola, Jurgen Klopp, Jose Mourinho and Claudio Ranieri’s tactics.
Michail Tsokaktsidis is a UEFA ‘A’ Licence coach and has used this analysis to produce 23 full sessions (98 practices) including: 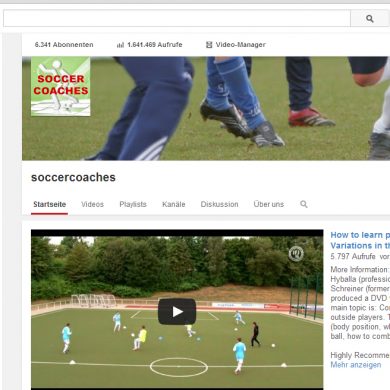