The following drills will improve the transition play and decision making capabilities of your players. They are taken from the new eBook “Rondos and Positional Games for Coaching of Tactical Principles” by coaches Levent Sürme and Marting Weng!

Sometimes it is also worthwhile to take a detour via a backpass to enable better pass angles for a counterattack. If a counterattack makes no sense, the last alternative is possession of the ball.

With the focus on offensive transition, there must always be the opportunity to play into the depth through a narrow corridor. This is the shortest way to the opposing goal. Outplaying the counterpressing also means to demand a pass dynamically along the neighboring corridor. From there it is possible to continue playing deeply.

Mark two fields as shown and set up 2 mini-goals.

After 10 passes, the team in possession can score a goal on the other side.

Training of decision making with the aim of combining vertically along a narrow field or using
diagonal forward passes to break opponent´s pressing. After a diagonal forward pass, the attack
must continue with 1-2 touches and maximum speed. This means, that the defending team has
no chance to setup his defense again. Passes to half spaces and to the strikers are trained.

After switching field, limit touches. One player free touches, the other teammates only 1-2
touches.

4v4 + 3 – Getting behind the last defensive line by supporting

A signal is given to the remaining players when the striker gets a forward pass in front of the
opponent defense. Either run forward behind the last defending line to receive the ball or
demand for a lay off pass. Accordingly, the area is only narrowed further in depth. 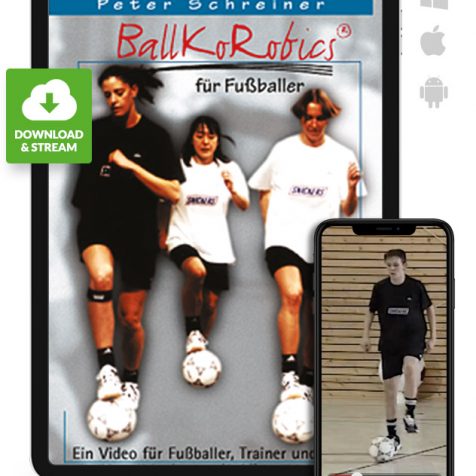