THE IMPORTANCE OF DEVELOPING VISION SKILLS FOR FOOTBALL PLAYERS

When Xavi Hernandez from FC Barcelona, best player of the European Cup in 2008, is receiving the ball, he rarely shows stress under pressure, because he always peeks over his shoulder before receiving a pass. Before he receives the ball, his vision is a critical component in maintaining his first main objective: maintaining the possession of the ball.

Xavi is able to determine (before the ball touched his feet):

1) if he is going to be challenged for the ball by one or two opponents and
2) what are his best choices for his successive play.

At times his eyes and brain recommends him to dribble and at times he prefers to pass, yet he is always remaining calm and rarely gives the ball away. Great players in other sports also possess outstanding vision skills and are able to make consistently spectacular moves and passes to the amazement of their fans and paricularyly to their teammates.

Training of visual skills
The training of visual skills for elite athletic performance is becoming more and important in training individuals of many sports, besides the coming trend to improve performance levels in football or soccer through “brain-jogging”.
While the majority of coaches and athletes are still in the dark about the benefits of perceptual training, those at the highest levels are steamrolling forward.
Since the beginning of this new century I have affirmed in many conferences around the globe that “Football or Soccer nowadays must always start in the head of the players before it is finished with their feet”.
The number of world-renowned football or soccer coaches is increasing who agree that the performance level of their players could be still improved through teaching them to read and understand the game of football, stimulating to a maximum all their senses!
It’s known that 85 percent of the information the players get is through their eyes, but normally human beings only tend to use 40 percent of their senses. They only can perform as well as they are able to see, and seeing the correct things is a skill everybody can learn. The eyes of a player can only see and recognize what the brain knows! And the more you know, the more experienced you are, the more you are able to see, to detect or to read from a game situation on the field.

One of the worst mistakes a professional footballer can make is to believe that he is either born with or without the skills of anticipation, vision, timing, game intelligence, game tempo, speed of reaction, focus and concentration and that they are not trainable. If he wants to achieve his optimal performance level, he must do exercises to condition and sharpen his sensory system, including vision skills, auditory and brain-processing speed.

Soccer or football players often have to react to a changing situation very quickly. Therefore they should be prepared to make a snap decision. Visual training which improves the way the players see and process all important information around him, is the most underrated and overlooked tool available to any serious soccer or football player who pretends to take his game to a higher level.
The consideration of visual skill training doesn’t only help the player to track the ball and opponents as well as his team-mates more quickly and accurately, it will greatly improve his peripheral awareness, his reaction time, his capacity of anticipation and, most importantly, his ability to maintain focus for a full game.
Once the vision skills of our soccer or football players are systematically developed it will help all to reach a higher level of play though assuring a competitive advantage against those who only master the many physical skills.
Very often the difference from a good player to a great player is simply their visual skills on the playing field. Teaching a player vision, depth perception and peripheral vision has to become therefore an important task from now on for all who are looking to improve their visual awareness.

Players with an excellent perceptual ability are capable to see things that other players don’t see (for example Xavi or Iniesta from FC Barcelona). This ability helps a physical weaker player to be successful against a bigger, stronger-built players. And if he is capable to anticipate an opponent’s play, he doesn’t need to be as fast…..

What football or soccer players are now realizing is that sports vision or sensory training as well as football or soccer specific brain-jogging is absolutely essential for achieving top performance levels in soccer or football. Indeed, like physical conditioning (speed, endurance, strength and coordination), technical mastery and proper diet, it can make all the difference, particularly when there is so little to choose between in competition. 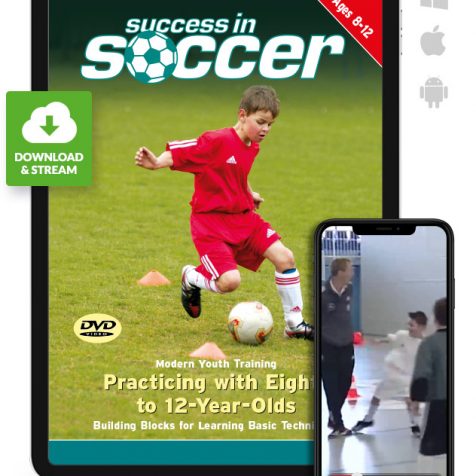 Soccer Training DVD: Playing and Practicing with 8 to 12-Year-Olds