Join Soccer-Coaches.com on YouTube! Over 40,000 subscribers already!
Home
Soccer Training
Soccer Tactics
The importance of space according to Pep Guardiola

The importance of space according to Pep Guardiola

According to Pep Guardiola space and time are very important in soccer and especially for a team that wants to dictate possession by using positional play. When the attacking team dictates possession, the defending team usually drops back within its middle or defensive third. The focus is on retaining a compact formation and allow very limited spaces around the ball. This makes it hard for the attacking team to break them through.

How to penetrate the opponent´s lines following positional play principles. Learn why this specific style is more effective than the others. Over 75 pages, includes detailed explanations, specific drills and game situations!

However, there are ways to move the opponents away from their zones of responsibility. Pep Guardiola says that space is always there, no matter how the defensive shifting is carried out. The important thing for the attacking players is to locate this available space and find a way to exploit it.

That’s why players should be familiar with the concept of space and recognise when and where it is created. Finding and exploiting it especially between the lines is significant to move the ball to the crucial central area by using short and accurate passing.

Available space on the weak side

Firstly, the attacking players have to understand that the space is always there no matter how the defending team carries out the defensive shifting. If for example the ball is near the side line because they try to limit the space near the ball area, then space is created on the other (weak) side, as it is presented on the diagram above.

Available space near the side lines

If the ball is in the central area and the opponents try to stay compact there, space is created near the side lines.

Available space between the players

Finally, if the defending team tries to restrict the spaces near the side line by taking up wider positions between each other, then the horizontal cohesion is not good enough and space is created between the players. All the above examples are helpful to understand that the space is always there.

This article is part of the new eBook by Athanasios Terzis, “Pep Guardiola Case Study – How to penetrate the opponent´s lines following positional play principles“. 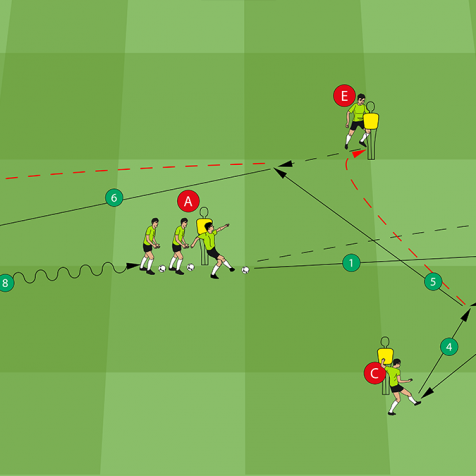 Soccer Passing Drill for 9 to 10 Players