Building a solid and confident attack

Using the 4-3-3 formation against a well-organized defense:

Ralf Peter examines the option: Using solid, confident attack-building to get past a compact and well-organized defense.

As individual, group and team defense tactics continue to improve, it becomes necessary to improve attack tactics as well. It’s true that many coaches define success in terms of minimizing goals against, and they structure their practice sessions accordingly.

However, given the lack of qualities like creativity and intuitive play in so much of today’s soccer, a special emphasis on offensive play has become an essential part of youth training.

The wing attack: Objectives and advantages
When you build a solid attack in your own half, with lots of passes back and forth, you often allow your opponents to drop back into their half and to get organized in front of their goal. Setting up a shot against this sort of compact defense requires safe, versatile, patient combination play. When opponents have dropped so far back that they’re primarily covering their penalty box, the wing attack, with crosses and back passes, can be an effective tool. Attacking up the middle can often be effective as well, e.g. with tactics like wall passes and three-player combinations. However, this approach requires talented individual players and fast, solid passing.

The wing attack, on the other hand, has the following advantages:

Other aspects of the attack
Building a solid and confident attack against a massed defense formation also entails the following aspects: 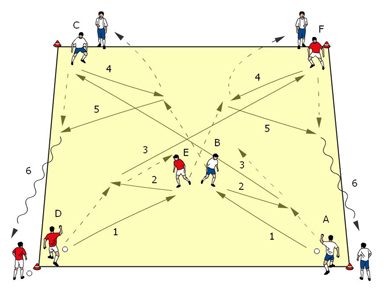