3 Drills to Improve Counter-Pressing of Your Team

One key component of Jürgen Klopps style of play is counter-pressing (Gegenpressing). In a nutshell it is the ability to regain possession of the ball as quickly as possible after loosing it to the opposing team!

We show you three drills to improve the counter-pressing of your team, taken from the book “The Art of Counterpressing” by Steven Turek

eBook – The Art of Counterpressing

The perfect eBook on how to successfully implement counter-pressing into your team! Written by Steven Turek!

Counter-Pressing Drill 1: 4 v 2 with Change of the Fields

Organization: In a field (10x10m) is being played 4 v 2. If a blue player gains the ball, he transitions from defense to offense. The red player, who lost the ball, transitions to defense. If Red plays four successive passes, they need to change into an adjacent field.

Coaching Points: Blue follows all principles of defending two by two. Moreover, the change of fields is a good possibility to create a pressing situation since a red player receives the ball in a closed position.
Variation: After a turnover, Red is allowed to regain possession. In this case, it only comes to switching tasks if Blue reaches an adjacent field (by a drib-bling or a pass).

Variation of 4 v 2 with Change of the Fields

Another blue player is moving in one of the free fields. If the red team passes to change fields, this blue player is allowed to move into that specific field and apply pressure. A blue player of the original field remains there and waits for the next shift.

Organization: With a pass from the coach into the field, two blue players start into a 4 v 2. If Blue gains the ball, they receive one point. If Red accomplishes four successive passes, they receive one point. Is the play in one of the fields finished, the coach passes into the other field and another two players start. After one minute the tasks switch. Which team scores the most?

Coaching Points: The two defending players need to aggressively try to apply pressure on the ball carrier since only a short timeframe exists to score.
Variation: If the offensive team accomplishes four successful passes, they pass themselves into the other field.

eBook – The Art of Counterpressing

The perfect eBook on how to successfully implement counter-pressing into your team! Written by Steven Turek! 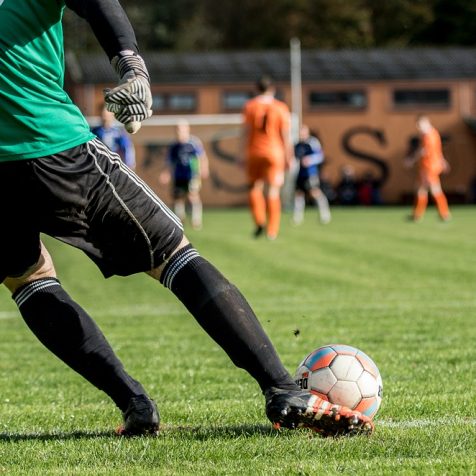