Two weeks after his seminar series in Egypt, Peter Schreiner was in Belgrade from December 15th-17th, 2021. There he presented (theory and practice) to 40 coaches from the “Red Star Academy” and 6 coaches from Zenit St. Petersburg.

The main topic was his “Education System for Shooting at Goal” from U7s to professionals.

Together with Peter Hyballa who presented “deep runs” in his seminars, Peter Schreiner had 2 days full of practice and theory sessions.

Training system for shooting at goal in 8 steps, the focus in Belgrade was on target shooting training. In a 70-minute introductory lecture, Peter Schreiner presented his 8 levels from U7 to professional.

Overview: 8 levels from beginner to professional

During his first visit to Belgrade, Peter Schreiner presented Part 1 on the subject of “Individual training for strikers”, focussing on precision training in close range and at the edge of the penalty area as well as game forms for shooting on goal.

In December the main topics were:

“1v1 against the goalkeeper and pressure of time and opponent when shooting on goal.”

The seminar was perfectly prepared by Dusan Rakic.

Practice demonstration with the U17 from Red Star Belgrade

Practice 01 – Examples from the training system for shooting at goal

After the theory, Peter Schreiner presented training forms for different levels of his training system for shooting on goal. The demonstration group was the U17 from Red Star Beograde, who acted highly motivated and focused.

Finish with foot – 6-12 shots on goal then change

Variation: Change from header to shot on goal

Basic exercise – dribble over the goalkeeper

In this basic exercise, the players learn the essential points for 1v1 against the goalkeeper if he has come out further than the 11m point. The striker is put under pressure from behind by an opponent so that he musst attack at top speed. Later, the players apply what they have learned against an attacking goalkeeper.

Application – 1v1 against the goalkeeper

The goalkeeper decides whether to stay close to the goal or run out. The pressure from behind is important so that this exercise is game-like.

Peter Schreiner and Peter Hyballa gave some interviews for the local television station in Belgrade.

Interview for the local TV station in Belgrade

At the end: Applause from the coach for players and Peter Schreiner

Please send inquiries about seminars with Peter Schreiner for clubs and associations to: eMail: ps@ifj96.de 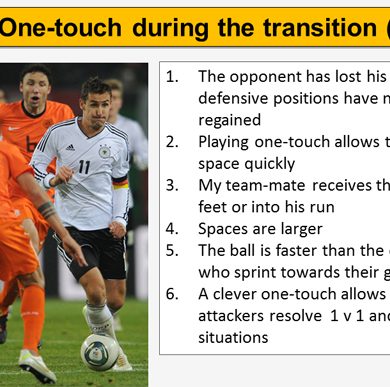