What is Tactical Periodization?

In doing so, a specific concept is created from a mix of tactical strategy as well as
training and sport-scientific findings that is meant to reflect the basic tactical principles
of a playing concept.

Originally, the “periodização táctica,” or tactical periodization, is based on the ideas of Portuguese sport scientist, Vitor Frade, who developed this model in the 1990s and who is a mentor to José Mourinho and André Villas-Boas. Also, the ideas and concepts of college professor, Fransico Seirullo of Spain, who coordinated athletic training at FC Barcelona, are and have been important contributions. Even if some coaching greats, like Ernst Happel, have pursued similar ideas in the past, the tactical periodization concept in its entirety is unique.

Previously, Louis van Gaal and Guus Hiddink also provided interesting and important
input with their ideas, and Germany even had a coach, Volker Finke, who then worked
for SC Freiburg and already structured his training based on this tactic and even back
then used the implicit learning approach.

Surely the best known proponent of tactical periodization is José Mourinho since he is
also the most successful proponent of this concept.

As previously mentioned, in tactical periodization, tactics always form the center of
planning and training design because only with tactics can other performance factors,
such as technique or athleticism, be transferred to a soccer game.

Tactics can be divided into three basic areas that build on each other:

Most important about the tactical periodization model is the idea of a holistic approach
that can show the complexity of the game.

The four performance factors in soccer are often trained independently of each other,
and focus areas are set separately within the individual areas, which makes it impossible
to project the complexity of the game:

Without this understanding of the complexity, individual components such as technique and speed cannot possibly be integrated into an overall game context.

But what good does it do in soccer if a player is always at the wrong place at the wrong time? That is why in tactical periodization the four performance factors are never trained separately, and, as the name suggests, tactics are always at the center.

Any game situation a soccer player wants to successfully solve always requires the following factors to come together, beginning with a tactical decision:

The adaptation process that is triggered with complex and realistic soccer training is called teleonomy, which is the scientific term for targeted and purposeful behavior of
organic systems that combines necessity and coincidence.

Who is Tactical Periodization for?

All those who think that the tactical periodization model is only suitable for professional sports: 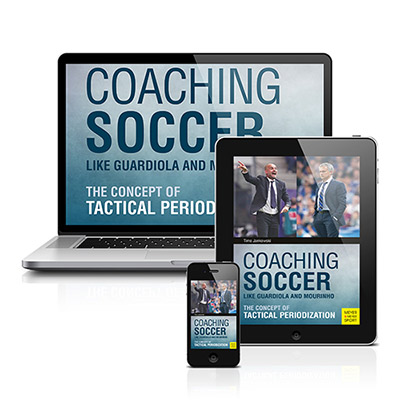 Learn more about Tactical Periodization, with the new eBook – “Coaching Soccer Like Guardiola and Mourinho“

The Concept of Tactical Periodization.
In this rich illustrated eBook, Timo Jankowski dives deep into the fascinating training concepts of tactical periodization on more than 240 Pages.
Get More Information Here 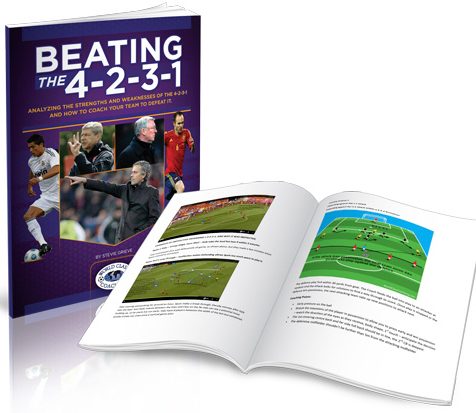