Join Soccer-Coaches.com on YouTube! Over 40,000 subscribers already!
Home
News
Attack the Space between the Defenders

Attack the Space between the Defenders

The following soccer drill is from the new book by best-selling author Athanasios Terzis called “Breaking through a compact defense” in which he analyzes sessions and tactics of Marcelo Bielsa and Pep Guardiola!

eBook – Breaking through a compact defense

This book also includes drills to help coaches apply the analysed tactics to their teams, by simply adding or adjusting them to their own training sessions.

Forward takes up the appropriate position to receive over the lines

The drill is executed in about half of the field. There are 10 red mannequins in 1-4-4-2 formation which represent the positions of the opponent players, while three white areas (target areas) are marked inside the box and between the mannequins (four defenders).

There are two central defenders, two fullbacks, the defensive midfielder and three players in the forward’s position who rotate after each repetition for the white team.

The drill starts with the central defenders passing the ball to each other and to other teammates. As soon as one of them decides to move forward with the ball it is the trigger for the forward to move towards an effective passing angle, by taking up the appropriate position and then use a well-timed run.

The moment of the pass the forward should be along in the same line with the mannequins (without being off side) and receive the pass inside the target area.

Then he has to finish as soon as possible. After each repetition the forward rotates. The long balls can be played either by the fullback or by the defensive midfielder or by the central defender.

In order to be accurate, the passes should be directed inside the target areas. There can be a coach along in the same line with the mannequins of the defensive line to check possible off sides of the forward and provide feedback.

eBook – Breaking through a compact defense

This book also includes drills to help coaches apply the analysed tactics to their teams, by simply adding or adjusting them to their own training sessions. 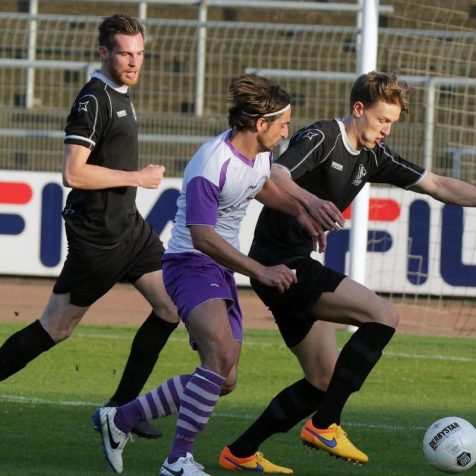