Soccer Coordination – the basis of success

In essence it relates to learning, controlling and using movements. Soccer players should be capable of learning new techniques quickly, economically and precisely, and adjusting them to take account of unexpected events.

Players who have been taught good coordination can control their movements when they have to act quickly, under pressure from an opponent, in tight situations.

Experts have expressed justified doubts about whether there are skills that can be conditioned independently of a specific type of sport. The complex reactions of a soccer player depend on a host of perceptive elements and previous experience (anticipation). They certainly cannot be compared with the reaction to a simple signal such as a starter’s pistol. This is why coordination skills should not be worked on in isolation from the circumstances and demands of the type of sport.

Which coordination skills are important for a soccer player?

The following coordination skills are often mentioned in the literature:

How can all of these skills and components be taught and conditioned?

What are the consequences for training sessions with soccer players?

Movement coordination contains a high proportion of perception, anticipation and concentration. Soccer players should carry out general coordination drills as early as possible, so that they can learn to move their bodies precisely in a wide variety of ways. The more varied a soccer player’s childhood experience of movement, the better he can control his muscles with the help of his nervous system. Numerous drills I will show in article:

More information in the DVDs for Coordination Training:

Coordination Training with the Soccer Ball

Author: Peter Schreiner
Duration: 60 minutes
.
Peter Schreiner takes his coordination and agility training method to the next level by introducing a soccer ball to the exercises.
This DVD combines technical training with a coordination and conditioning component through the use of simple field equipment.
.
The exercises allow the players to practice technique at game-like intensity levels while improving their overall fitness, coordination, explosiveness, quickness and agility.
.

Coordination and the nervous system

Soccer players should learn as early as possible to move their bodies precisely in a wide variety of ways. The more varied their childhood experience of movement, the better they can control their muscles with the help of the nervous system.

Balance Training in Soccer – The Key to Perfect Ball Handling

Modern soccer is characterized by its high tempo. To play soccer successfully, players must react faster than ever when they receive the ball, as well as making frequent sudden changes of direction, sprints into free space and instant switches from defense to attack. The demands on soccer players are so great that special and systematic training of their running coordination, especially their running technique and rhythm, appears essential.

What are the special aspects of the conditioning of running coordination for soccer players?

The running performance demanded of a soccer player differs considerably from that of an athlete. Sprints, turns, changes of direction, runs with the ball and challenges for the ball both before and after a sprint require the player to adjust his stride length and frequency to widely varied game situations. This makes a variable, flexible and selective application of running techniques during the game necessary. For selective conditioning of running coordination, it is necessary to set priorities within training sessions. Fast footwork, involving lightning fast coordination of nerves and foot muscles, is at the heart of many drills. Small, rapid steps ensure that the player can control the ball securely and move in any direction he chooses. The object is to remain in contact with the ground. He can then retain control of his body and accelerate quickly in any given direction. In addition, good footwork is essential to a good shooting technique.

By continuously adjusting his distance from the ball, a player ensures that he is in the best position when he shoots. As a result of practicing changes in stride frequency and length in a variety of drills, a player is able to adjust his speed to the needs of the game situation. A long, powerful sprint down the wing requires a different technique to a subtle change of direction and a short sprint in a restricted space. Players should also be able to switch smoothly and quickly from the small strides appropriate to a challenge for the ball to the long strides needed to sprint away into space. 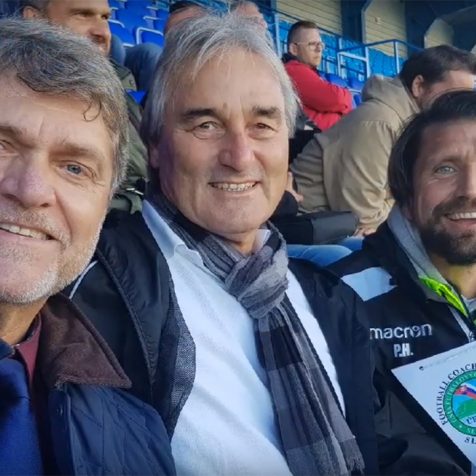 Peter Schreiner Speaker at the congress in Nitra (Slovakia)